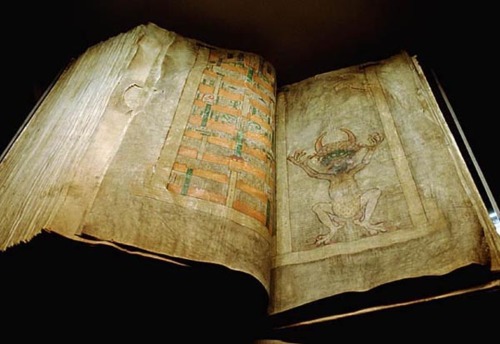 I had the wonderful good fortune of having a friend from Egypt, and although this is not the piece of art he brought to me, the one he did is absolutely amazing.

The Codex Gigas (English: Giant Book) is the largest extant medieval manuscript in the world.  It is also known as the Devil’s Bible because of a large illustration of the devil on the inside and the legend surrounding its creation. It is thought to have been created in the early 13th century in the Benedictine monastery of Podlažice in Bohemia (modern Czech Republic). It contains the Vulgate Bible as well as many historical documents all written in Latin. During the Thirty Years’ War in 1648, the entire collection was taken by the Swedish army as plunder, and now it is preserved at the National Library of Sweden inStockholm, though it is not normally on display

At the end of the Thirty Years’ War in the year 1648, the entire collection was taken by the Swedish army as plunder. From 1649 to 2007 the manuscript was kept in the Swedish Royal Library in Stockholm. The site of its creation is marked by a maquette in the town museum of Chrast.

On Friday 7th May 1697, a fierce fire broke out at the royal castle in Stockholm, and the Royal Library suffered very badly. The codex was rescued from the flames by throwing it out of a window. The codex apparently injured a bystander and some of its leaves fluttered away and they are still missing today. In September, 2007, after 359 years, Codex Gigas returned to Prague on loan from Sweden until January 2008, and was on display at the Czech National Library.

A National Geographic documentary included interviews with manuscript experts who pointed towards evidence (handwriting analysis and a credit to hermann inclusus – “herman the recluse”) that indicates the manuscript was the work of just one scribe.

About half of the Codex consists of the entire Latin Bible in the Vulgate version, except for the books of Acts and Revelation, which are from a pre-Vulgate version. They are in the order Genesis-Ruth; Isaiah-Daniel; Hosea-Malachi; Job; Samuel and Kings; Psalms-Song of Solomon; Wisdom of Solomon; Wisdom of Jesus; Esdras; Tobit; Judith; Esther; and Maccabees. Between the Testaments are Josephus‘ Antiquities of the Jews and De bello iudaico, as well as Isidore of Seville’s encyclopedia Etymologiae and medical works of Hippocrates, Theophilus, Philaretus, and Constantinus. Following a blank page, the New Testament commences with Matthew-Acts, James-Revelation, and Romans-Hebrews. Following the picture of the devil, Cosmas of Prague’s Chronicle of Bohemia, a list of brothers in the Podlažice monastery, and a calendar with necrologium, magic formulae and other local records round out the codex. The entire document is written in Latin, in addition, it contains Hebrew, Greek, and Slavic alphabets (Cyrillic and Glagolitic).

The manuscript includes illuminations in red, blue, yellow, green and gold. Capital letters are elaborately illuminated, frequently across the entire page. The codex has a unified look as the nature of the writing is unchanged throughout, showing no signs of age, disease or mood on the part of the scribe. This may have led to the belief that the whole book was written in a very short time (see Legend). But scientists are starting to believe and research the theory that it took over 20 years to complete.

Folio 290 recto, otherwise empty, includes a unique picture of the devil, about 50 cm tall. Several pages before this are written on a blackening parchment and have a very gloomy character, somewhat different from the rest of the codex. The reason for the different coloring is that when parchment is exposed to light it “tans”, as parchment is made from animal skins, so over the centuries the pages that were exposed will have a darker color to them. Directly opposite the devil is a full picture of the kingdom of heaven, juxtaposing the “good versus evil,” in contrast with the picture of the devil.

According to one version of a legend that is already recorded in the Middle Ages the scribe was a monk who broke his monastic vows and was sentenced to be walled up alive. In order to forbear this harsh penalty he promised to create in one single night a book to glorify the monastery forever, including all human knowledge. Near midnight he became sure that he could not complete this task alone, so he made a special prayer, not addressed to God but to the fallen angel Lucifer, asking him to help him finish the book in exchange for his soul. The devil completed the manuscript and the monk added the devil’s picture out of gratitude for his aid.  In tests to recreate the work, it is estimated that in order to reproduce only the calligraphy, without the illustrations or embellishments, would have taken 5 years of non-stop writing.